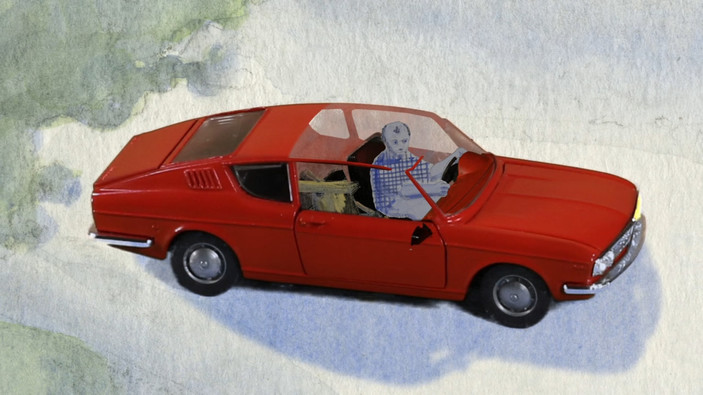 Alfred Fauchet, Here And There

"Alfred wants to get rid of things, but gets lost in the process. The car is moving, but too fast."

Alfred Fauchet, Here and There is a highly creative film directed and animated by Mathieu Georis about a man who wants to throw away things but gets lost in the process. This brief description, however, merely scratches the surface. It’s one of the most imaginative short films with a surrealist theme to surface online in a while, certainly one of the best in that category that we’ve had the pleasure to review and feature on this site.

Alfred Fauchet was created by talented Belgian artist Mathieu Georis as his graduation project at Brussels-based school La Cambre. It features one main character (who multiplies various times), internal and external conflicts, playful alterations of spatial and temporal continuity, and notably creative use of objects and staging.

The film idea came up when I saw a car with faulty turn signals. The car showed that it intended to turn left and right at the same time.

Located in the suburbs, the short presents remarkably surreal staging that alludes to fragmentation: one main character shows up multiple times in the same scene at the same time (without acknowledging his own various iterations). There’s a particular focus on an object, a car, that shows an unusual and erratic behavior, which complements that of his owner: it drives the passenger (instead of the opposite), moves the narrative forward and ends up dissassembling, its parts heading into various directions.

The aesthetic work is also worth highlighting, Alfred Fauchet, Here and There mixes great watercolor animation and backgrounds with stop-motion technique. Producing quality animation with these techniques requires hard work, especially considering the synchronization of the numerous elements present in the film. Compositing was done with After Effects to integrate the different layers.

A final word, we live in an age characterized by fragmentation and loss of attention, an age of “agitated amnesiacs” as defined by a well known journalist. From a sociological point of view the emergence of this film could be read as a symptom of our global society.

Mathieu Georis interview on the making of Alfred Fauchet