Big Lazy Robot on the making of iDiots

"Real Life. Pravda. Como la vida misma." The release of iDiots on the net has generated strong reactions around the world, spreading like wildfire, due to the accuracy with which it portrays addiction to technology and consumerism in modern society. Big Lazy Robot, the studio behind the film, has been producing world-class 3D animation for years, and is probably one of Spain's best kept secrets. The recent release of iDiots has put them in the center of the spotlight.

We had the pleasure of talking to Juan José Palomo, founder and director of Big Lazy Robot, about the making of the short film. 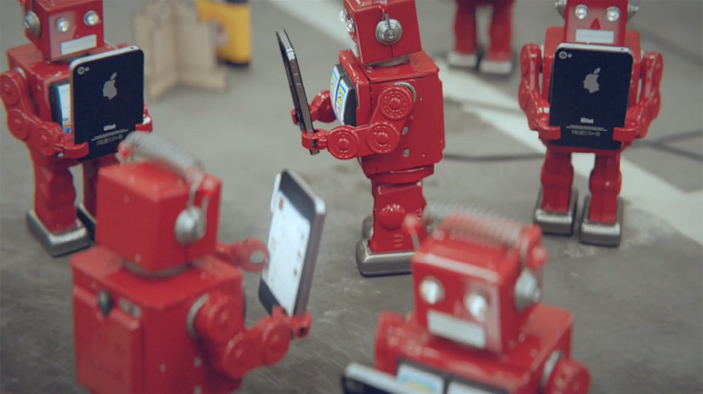 How did you come up with the idea for the film?

When we don’t have commercial work lined up we try to do something useful with our time. That’s how we come up with most of the ideas for our internal promotional videos, such as Exploit Yourself, or this one. Keloid may be a bit special in this regard.

Why did you choose to focus on mobile phones?

Everyone around the world has a mobile phone, and if it’s a Smartphone, all the better. It’s something that has spread around the whole world, to all countries and most societies. Our starting point though were the robots more than the phones themselves. We wanted to model these robots, and with their size they could handle cell phones better than anything else. This would also allow us to play with macro lenses and camera angles, to be a bit more creative and get away for a while from cars, perfumes or sports shoes.

How did you choose the different situations portrayed in the film? Was anything left out? 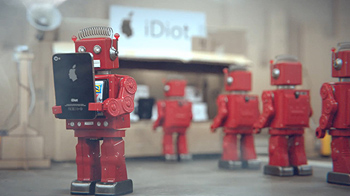 I think they are all ‘apps’ (see what I mean, why do we even know what ‘apps’ are?) that we have seen at some point. That is, they are real. People have these things in their phones for real. It may seem unbelievable, but it’s true. Yes, some were left out, mainly other applications (there was one about cooking, you could cook on your mobile). Also left out were other shots from the scenes that show up in the video. In the end we came up with something quite big.

How did you come up with the name for the short? What about the logo for the Smartphones?

Well, here go both things together. The ‘i’ at the beginning of the name is something very, very contemporary. The logo is also a joke, related to the same thing. Please, don’t make me go too much in-depth into this one… ha ha.

How long did it take you to complete the short?

Well, before finishing the other video, Keloid, we had already taken a look into the robots idea, so I dived into the project as soon as I saw Keloid was already walking on its own. Since then, it must’ve taken around four months, but four months of intense work. It took us a while to polish the idea enough so that all of us would be happy with it. We wanted it to be funny, carrying a message, for all audiences and with robots as protagonists. It also took quite a while to get the music to a point we were happy with.

The level of photorealism of the short is impressive. What software did you use? Was there any particular 3D or compositing technique that you employed for achieving this? 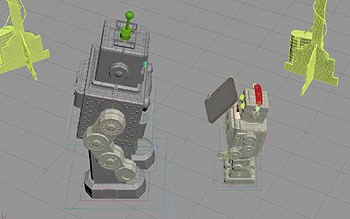 We made the short from beginning to end in 3DS Max, rendering with V-Ray and compositing in Nuke. We haven’t used any special technique for render or comp, same as always. HDRI, some direct lighting and little else.

Which technique did you use for animating the robots?

Keyframing. We haven’t done any [motion] capturing or anything along those lines. We have the real robots here at hand and we filmed them for reference, but nothing else. Nothing special. It was all done manually.

Sound plays an important role in the film, tell us a bit what was your initial concept and what was it like to work with Full Basstards. Who recorded the voice of the big robot singing?

The experience of working with Full Basstards was good. At the beginning it took us a while to find what we were looking for. We were coming from working on Keloid, which was a much harder project and for this one we needed something more simple, catchy, but not overly loaded. A couple of melodies took a dive in the process. Still, we can say we are happy with the final result. It’s simple and functional.

The voice of the singing robot belongs to Andrey [Francés, from Full Basstards].