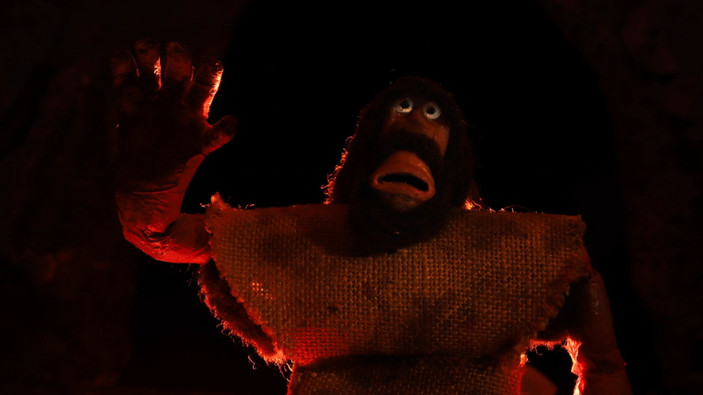 HORH is a fun short film about a caveman who lights a fire and is surprised by his own shadow. Another great short coming from Atelier de Sèvres, this one was created by eight students during a three-week workshop. It presents one character, an internal conflict, an accent on lighting and a focus on comedy built through misunderstandings.

Staged in a cavern, purportedly in the past, the film takes place in an interior and uses warm colors, dedicating special attention to lighting and shadows. A number of tighter shots are used to transmit the character’s expressiveness, which is responsible for building and conveying conflict, complemented by sound. Close-ups are employed to show the gesture of the character drawing over the rocks.

Visual rhythm is high and increases in situations of emotional displacement, helping transmit the character’s struggles. A few camera moves have been added in post to this effect, plus a nice punch out camera move is employed towards the end (1.31-1.33). Other cameras are static, visual rhythm is mostly handled through editing and motion within the frame (including lighting).

Sound design is worth noting, too, as it helps greatly in transmitting the impression of fire (wonderfully animated through stop motion), the struggles and emotions of the main character, the echo and ambiance of the cave and helps build rhythm through the great choice of drums and music.

What makes it work so well? Creativity, humor, surprise, effective directing and the great expressiveness of the character. The playfulness and humor of the film seems to reflect the production process the students went through.

If you participated in the film and would like to see your portfolio link added to this page, please send it via our contact form. Thank you.