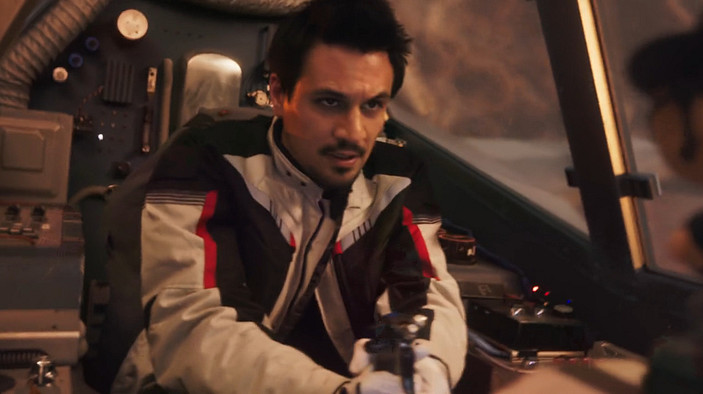 "In the final stage of a galactic competition, four spaceships compete in a race against time."

Coming from France, Race is an energetic short film that presents a spaceship racing competition in a desert planet in which only one pilot will survive. The film was created by eight artists as their graduation project at ISART Digital school and features one main character, external conflicts, a strong conflict with the environment, a SciFi theme and an emphasis on visual rhythm for transmitting speed.

We wanted to have a real set for our actor during the filming, for more interaction and realism (…) so we decided to create our own set

Race is staged in interior and exterior locations in a desert planet, and also in a stadium that is located outside of the first planet. Staging plays a particularly important role, as the desert planet that’s being destroyed to initiate the race, triggers a conflict with the environment that successfully raises the tension throughout the short, boosting the external conflicts and turning the race into an altogether different competition.

Aesthetic work is impressive, the amount of effort dedicated to building the environments is worth noting, as well as the exceptional VFX work to destroy it, including physics simulations, smoke/pyro effects, etc., and the filmed footage / CG integration. The effort dedicated to spaceship designs is also worth noting. The production system implemented by ISART that allows for eight artists to work on the same film played a part in helping build a world with this amount of detail.

Visual rhythm is intentionally high with the aim to deliver a sensation of speed and dynamic narrative pace. It does so successfully with fast cutting and plenty of camera moves. Due to this, screen directions are carefully respected to build coherent spatial continuity. Quick pans, tilts, dollies, zooms, camera shakes and assorted camera moves are complemented with close-ups and medium shots of the pilot, plus motion within the frame to increase visual rhythm. Music and sound effects also play an important role in handling rhythm, as well as in building soundscapes and bringing materiality to the spaceships and various VFX. The crowd whose reaction at the end is described through sound helps amplify the resolution of the conflict and the emotion transmitted.

What makes it work so well? Strong conflict that raises it above a standard race, impressive aesthetic work, effective directing with great use of camera moves for creating perception of speed, tight editing, tension that keeps increasing until the end and the inclusion of highly effective emotional shots that bring identification with the main character and his conflict.

The directors of Race kindly shared with us their experiences on the making of the film:

At the beginning of the project, our goal was to make a short film inspired by American blockbusters. After brainstorming, we chose to realize a Sci-fi race and we quickly got inspired by the podrace in Star Wars – The Phantom Menace. We are all approximately 24 years old, so we grew up with the prelogy and this podrace marked us.

We wanted to have a real set for our actor during the filming, for more interaction and realism. First we searched for Sci-fi escape games or real planes like “Musée de l’air et de l’espace” in the north of Paris but it was too complicated or too expensive. So we decided to create our own set and make a Sci-fi cockpit for our pilot. The cockpit was made in 3 months, we worked on it all weekend and some days after work. This cockpit is a mix of wood planks, metal bar, electronic old stuff and everything we found.

This choice impacted our spaceship design. We are not carpenters and we never made a set decors before, so our design had to be simple and feel like it was repaired many times. We couldn’t have a futuristic cockpit with carbon materials or rounded windows.

The filming lasted 3 days on a green screen background. We all had a job to do during the shooting, first assistant, director, camera operator, data wrangler etc. It was a good experience for us, and after that, we resumed our specialties, compositor, environment artist, modeler, texture artist, FX artist etc. The post-production (editing, visual effects, finishing) lasted 1 year. We were 8 for the VFX work, and 3 people for music and sound design.

The last four months of the production were hard because of the Covid19 pandemic and the confinement in France. We needed to adapt our work remotely, organize meetings in video conferences, use remote computers at school, some people had really bad internet speed so it was complicated but we never gave up.

In terms of environment, we mainly used Clarisse and Quixel megascan. Sometimes we used Houdini to create mountain noise on simple planes only, we didn’t use heightfield nodes. We used ZBrush two times for precise rock modeling like the arch and the entrance of the cave. We tried to create a procedural rock generator and a crystals procedural generator but finally the result was not good enough for us.

In terms of FX, we used Houdini for everything (Rigid body, particles, smoke/pyro simulations). Some of them were completed by personal stockshot or with a little bit of After Effects (like the laser destruction using the Saber plugin). For the crowd we created a point cloud in Houdini on which we scattered characters directly in Clarisse. We used Mixamo for the characters’ animation.

Regarding software, we used Clarisse for lighting/rendering and set dressing, Houdini for FX, Maya for modeling/rigging/animation and layout, Substance Painter for texturing, ZBrush and Mari for creatures, After Effects for some motion design effect, Nuke for all the compositing, Davinci Resolve for the editing and color grading.

– There are a lot of Easter eggs in the film, you can find for example the Mount Rushmore in the background, a Jurassic Park visitor card and even Nemo the clownfish.

– The sequence shot with smoke and geysers was the shot with the most FX on screen. Indeed, there are one billion polygons (thanks to Clarisse iFX), 44 smoke geysers, 37 smoke meteorites, 27 smoke impacts, 4 smoke trails (spaceships) and 75 GB of DATA (FX only).