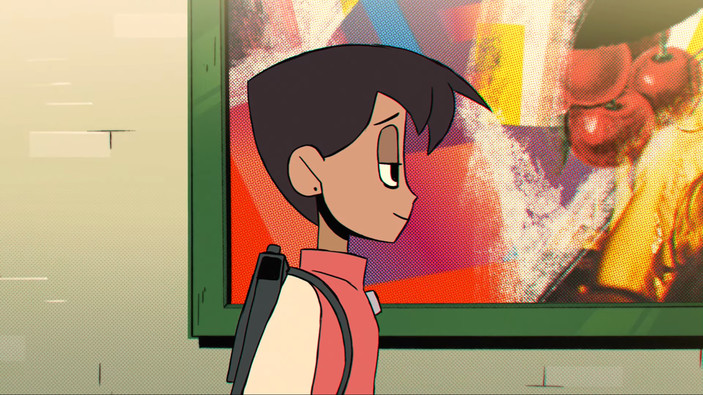 The Ghost Of The Subway

The Ghost Of The Subway is a short film about a young man who has a supernatural experience at the Paris subway. It was created by five artists at Lyon-based Bellecour École as their graduation project for the Bachelor Animation 2D program.

With a distinct urban flavor, the film is staged in the city of Paris, in the subway, in exterior and interior locations, as well as in a dream. Appropriately enough, all of it takes place during night time. The short features three main characters (one of them a ghost), a strong external conflict, supernatural themes and shifting subjectivity in narration.

A stylized aesthetic is used, with particular attention dedicated to color palettes and lighting. Non-realistic colors are employed in the dream sequence. Good effort has been dedicated to character and environment design. The various locations featured in the short are presented in detail, which points to the amount of research done by the artists.

The brother-sister interaction works particularly well. Their alternating lines help add rhythm and contrast to the film. Nina, the sister character, brings comedy to the story as well as helps potentiate the Sam character’s story. She also helps weave the narrative together by livening up the mood and adding dialogue to what could’ve been mostly silent scenes.

Narrated mostly from Sam’s point of view, the film makes great use of shifting subjectivity in narration to potentiate the story during scenes of strong emotional displacement. Tighter framing, internal sounds, slow motion and intense facial expressions are employed for example in the sequence in which Sam falls in front of the train to increase subjectivity in narration.

Throughout the film, framing employs wider shots to describe the environments and plenty of tighter shots (two-shots, medium, close-ups and extreme close-ups) are used to place an emphasis on characters’ expressions and transmit conflict. Visual rhythm is high, handled through editing, pans, dollies, zooms, camera shakes, handheld cameras, changes in lighting, shifts in focus, motion within the frame, etc.

The film’s music score composed by Bei-Jing is worth noting, too. It adds a lot to the visuals and helps drive the short to a lighter mood. The way it’s introduced as pit music and transitions to diegetic music works smoothly, as does also the way it’s employed towards the end of the film.

What makes The Ghost Of The Subway work so well? Great directing with effective use of subjectivity in narration, intense conflicts, fun dialogues, supernatural elements and various plot points that hook the audience.

If you participated in the film and would like to see your portfolio link added to this page, please send it via our contact form. Thank you.