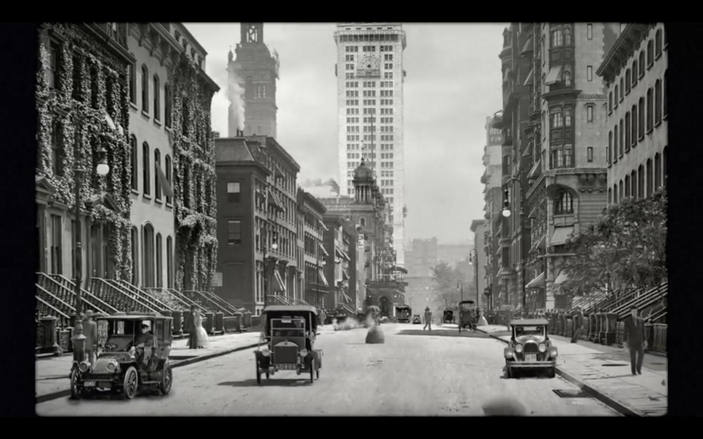 "A wonderful, nostalgic portrait of US cities from the early 1900s recreated from photos."

Russian artist Alexey Zakharov has created this experimental short that offers a nostalgic journey through various US cities from the early 1900s. Using camera projection techniques the artist recreated the landscapes and scenes from a number of old photos.

No conflict is present. Staged in various urban locations from the United States (New York, Washington D.C., Boston, Detroit, Baltimore), the short uses slow camera moves and assorted animated elements to help bring the scenes alive. No particular character is described, the focus is placed on the urban scenes themselves (extreme/very wide shots are used, no close-ups). Visual rhythm is usually slow, as is the editing pace, which allows to grasp and appreciate the numerous details of the images.

An emphasis is placed on aesthetics, the artist paid special attention to composition, framing, atmosphere and iconography, which translates into moody, nostalgic scenes full of character. There is also abundant use of sensory images, which breathe life into the film and help evoke emotions. The short transitions through night and day, as well as through various seasons and weather conditions, combining the urban with nature, and transmitting a sense of passage of time. Computer Graphics are used heavily throughout the short, for turning the photos into 3D spatial scenes as well as for adding 3D characters, props, smoke, etc.

Postproduction and compositing techniques help integrate the recreated photos and CG elements together, with the music (Al Bowlly’s “Guilty”) providing cohesion and temporal continuity. The use of a time-traveling book serves as a nice narrative device that helps weave the different scenes together.

Also worth noting are the self-reflexive element in the New York winter scene that has a camera in it (2m23) and the fact that a Moscow-based artist would choose to focus such a nostalgic project on cities from the United States, which speaks a lot about world trends of the past decades as well as the possibility of having quick access to those images from another country through the Internet.

Breakdown from another photo to 3D project

Other photo to 3D projects from Alexey Zakharov