Daniel Robichaud on the making of Tightrope 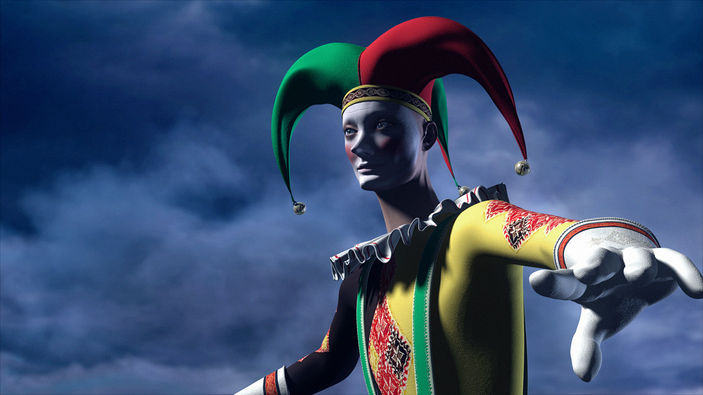 An iconic short film from the late 1990s, Tightrope was written and directed by Canadian artist Daniel Robichaud while he was working at Digital Domain studio. He contributed to films such as Apollo 13 and acted as Animation Supervisor for The Fifth Element and Titanic. In this interview he discusses the making of Tightrope and offers some glimpses of Digital Domain of the 1990s.

Tightrope was the result of an internal contest held at Digital Domain. When and how was this contest organized?

Back in 1998, Digital Domain’s CEO Scott Ross announced that the studio was interested in sponsoring the creation of a short animated film, as a first step toward developing its own original content. The ultimate goal was to evolve into a production company creating feature films. Several story concepts were pitched, and eventually mine was picked, in part due to its simplicity: it featured only two characters in a minimalist environment, and there was no spoken dialogues, the characters interacting pantomime-style. The announcement of the winning entry was made during one of the company’s weekly staff meetings taking place in our screening room. 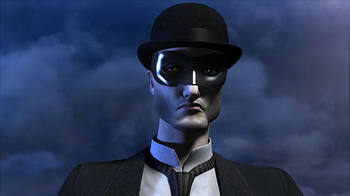 Based on the rules of the contest, how did you come up with the idea for Tightrope?

I wanted to come up with a playful, whimsical story, and keep it as simple as possible, to make the project manageable. Limiting the cast to only two characters would allow our small team to showcase its animation abilities. The protagonist is the Jester, a happy outgoing fellow moving along a tightrope, while his nemesis, the Suit, is ominous with a dark demeanor, his face obscured by a mask.

How did you approach character design? 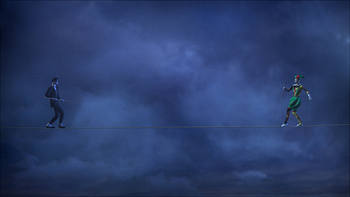 The character designs look like caricatures of real persons, with exaggerated proportions. But there is also a realistic quality to the materials and textures, which help make the characters seem alive in their surrealistic world. I wanted to convey a sense of timelessness by giving the Jester a colorful costume reminiscent of 16th Century “commedia dell’arte” theater, while the Suit wears a dark Edwardian three-piece suit and bowler hat. Both characters have the exact same height and body proportions, symbolizing, perhaps, the two facets of one’s personality.

Tell us a bit about the aesthetic you chose for the film.

There is a stylized realism to the overall art direction. The models (characters, environment, accessories) were built with a high level of detail. The lighting consisted of area lights that revealed the intricate surface textures, including skin pores and wrinkles in the fabric. There is a noticeable fluidity in the motion of the characters, and a great attention was dedicated to the secondary animations of rope movements, cloth deformation and even the little bells oscillating on the Jester’s hat. This overall attention to detail give the film an element of believability which, at the time, we called “photo-surrealism.” 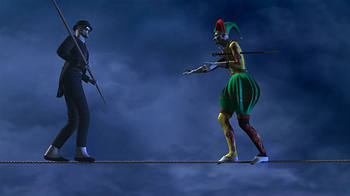 The environment plays an expressive role. What was your concept behind environment design?

The environment consists of ropes suspended in a cloudy sky, an improbable world which appears uninhabited, at the exception of a flock of birds. At the beginning of the piece, the dark clouds look almost menacing, until the sky becomes completely black. Then a mysterious spotlight is turned on, illuminating the action on the rope, and the interaction between the two characters which evokes a circus performance. At the end of the film, after the resolution of the conflict, an imaginary sun appears to rise, giving the clouds colorful hues and suggesting the beginning of a positive, hopeful new chapter.

Tell us a bit how you approached camera placement.

Initially wandering in an environment of seemingly infinite dimensions, the camera offers the viewer a bird’s-eye view of this surrealistic world of clouds and ropes, until it finds the Jester, and soon after the Suit. From this point on, it alternates between the up-angle view from a fictitious audience, and close-ups of the characters’ facial expressions. During the first two acts, the camera is consistently positioned to the left side of the rope. But at the beginning of Act III, it suddenly crosses over the imaginary axis and goes to the other side, visually emphasizing the crucial plot point of the Suit launching his counter-attack… which will have dire consequences. 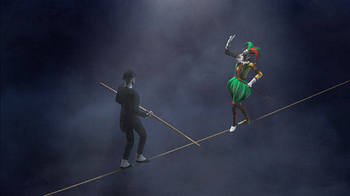 The short was produced by a team of around 15 artists. Please tell us a bit about the production process.

Initially, the look and feel of the film was developed by a core team consisting of myself, and two animation supervisors (one for each character): Stéphane Couture for the Jester, and Bernd Angerer for the Suit. Each developed the personality of their respective character, as well as rigging them and creating a facial animation interface. When the project was eventually green-lit, the team grew with additional character animators and effects artists. During the production phase which lasted around six months, the progress was shown to Scott Ross in the context of weekly meetings. In his role as producer, Scott was extremely supportive during the whole process, and when the film reached completion, he used his connections to secure the services of composer Robert Miller for the musical score.