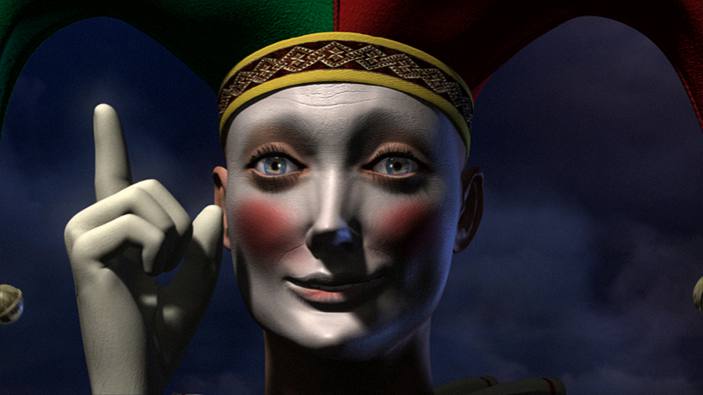 "A jester walking a tightrope has an unexpected encounter."

Tightrope is a short film written and directed by Canadian artist Daniel Robichaud that features two characters, an external conflict and minimalist, surreal staging. The film was the result of a competition held at Digital Domain studio in the late 1990s, launched by then CEO Scott Ross. Employees were invited to submit a proposal for a short film that would be between two to four minutes long, with one or two characters in a minimalist environment. Daniel Robichaud’s idea won the contest and Tightrope was born.

My intention was to create a story about good vs. evil. However (…) I wanted to leave room for interpretation

The short focuses heavily on the interaction between two characters. There is no dialogue, so body gestures and facial expressions are used to communicate emotions and build conflict. Camera shots transition accordingly from wider shots to closer ones, to help portray these body and facial expressions, alternating with two-shots or over-the-shoulder shots to help cover the characters’ actions and link the jester’s tricks to the movement of the suit’s pole, hat and tie. The staging allows for unusual use of low and high angles, emulating those of a circus.

Character design plays an important role, the contrasting aesthetics and personalities of the playful jester and the serious suit help build the conflict. The short uses a stylized, surreal aesthetic, with a minimalist use of elements and a non-realistic staging that borrows some elements from theater (or circus). Interestingly enough, along with camera movements and slanted angles, the environment is also used expressively to transmit mood and emotions.

It’s worth noting that Tightrope was created with the 3D animation software Softimage and widely used by the developers of the software to publicize its capabilities after the film’s release. The developers actually provided direct support to Daniel Robichaud and his team during the production of the film.

Interview – Daniel Robichaud on the making of Tightrope