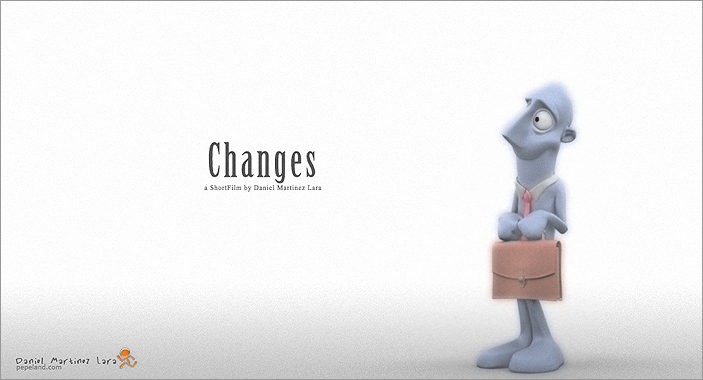 "A non-conformist rebels against routine and its rules."

Coming from Barcelona, Changes is a short film created by Daniel Martínez Lara, one of the pioneers of CG animation in Spain. Besides his quality animation work, Martínez Lara is well known for his teaching activities: he founded the first major Spanish CG animation school (Pepe-School-Land) in the year 2006, which has enjoyed continuous growth through the years.

[It’s] something I’ve given a lot of thought to; follow a path laid by others or choose to create your own. 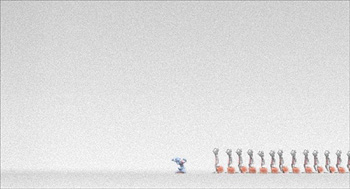 Changes presents one main character with a strong internal conflict created by a conflict with the environment (the social system), accompanied by a crowd of undifferentiated characters.

The essence of the short lies in portraying the growing frustration the main character, “Copi”, feels with routine, repetitive work and following a path everyone else is unquestioningly taking, and what happens as a result of his rebellious act. Humor and surprise are important elements for transmitting the short’s message.

Let’s see what filmmaking techniques the director used to achieve this.

The facial expressions of Copi are key elements for conveying the internal conflict of the character. Due to this, wide shots are used to establish initial staging and spatial relationships (and to signal repetition), but close-ups are more frequently used after that, with a camera following the main character’s face to transmit his emotions clearly. What begins as an omniscient camera turns into a semi-subjective one. The close-ups and the focus on the facial expressions shape the way we perceive the shots that follow, interpreting them from Copi’s POV and associating them with his changing mood. Mixing Copi’s expressions with fragmented close-ups of feet walking and slanted angles allow to further identify with the character’s face and transmit an internal, psychological interpretation of the shots.

After the character reacts with anger jumping on his suitcase the shots widen, and medium shots and reverse shots are used to cover the action, show the main character and the reactions from others, which allows to prepare the staging for creating the surprise ending of the short.

Changes employs mostly static cameras. Moving cameras are needed in a few cases: Copi is constantly in motion during a long part of the film and a dolly is used for following and keeping him in the frame (to make sure his expressions are transmitted clearly to the audience). In addition to those cases, a crane (up) is combined with a tilt (1m16) to reveal other characters, a pull back (1m41) to reveal an element of surprise and a final dolly shot to follow Copi (1m57) and then pull back to signal the end of the film.

Since static cameras are predominant, visual rhythm is created through fast paced editing and movement within the frame. Characters are in motion in most part of the film. 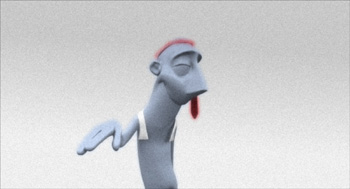 At an average shot length of 2.9 seconds, editing is quite fast and in line with current filmmaking averages. Mostly cuts are used and just one fade. Editing is used for building continuity, creating visual rhythm, amplifying repetition by putting together shots of fragmented views of repetitive actions, associating the conflict of Copi to what happens around him (by alternating between the close-ups of his face and the fragmented shots of other characters), and also for accelerating the pace and intensifying the conflict leading to Copi’s reaction.

Time flows continuously, with only one small jump forward signaled by the fade.

Sparse, stylized staging is used to present a contemporary urban situation. Martínez Lara chose a minimalist staging, in his own words, to “focus on the story and characters, which is what [he’s] really interested in”. Special attention has been dedicated to animation and to Copi’s facial expressions, which are essential for transmitting the character’s conflict and the emotions he later goes through.

The crowd has various interesting functions in the film: it performs a looping choreography that helps transmit repetition through its patterned behavior (setting up the initial context against which the main character can rebel), it acts as an audience and amplifier of the event, as an external social conscience that judges and reacts to the main character’s behavior, and as a final re-signifier of the main character’s actions by copying him and swallowing him into a crowd of undifferentiated characters, as the camera pulls back at the end of the short.

The short employs a palette with just a few colors and an emphasis on greys (in line with the subject of the short), along with stylized and highly expressive character design (in the case of the main character). In the aesthetic we find another element for transmitting repetition: all crowd characters have similar color and shape.

The iconography employs just a few objects, which are characteristic of office work, a suitcase and a tie. Color is used to emphasize them. The way the characters walk in a line is also a behavior that is usually associated with urban situations. 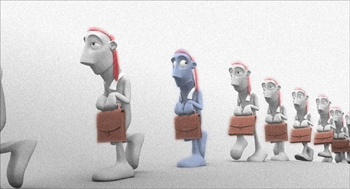 Local socio-cultural factors may be easy to trace in this case. Changes is based on a comic strip by Quino (pen name of Joaquin Salvador Lavado), a talented Argentine cartoonist with Spanish ancestors. It is no surprise that Martínez Lara got to read his books as a child, as they were well known and appreciated in Spain.

The universal appeal of the short is understandable, repetitive work and de-humanizing pre-established rules are a trademark of contemporary societies (Chaplin’s Modern Times deals with similar subjects and premiered in 1936). Quino’s humorous and cynical approach to these and other subjects of “modern” society have earned him wide acclaim, and his works have been translated to numerous languages.

Changes uses close-ups, a semi-subjective POV, an accelerating editing pace and an emphasis on facial expressions to transmit the increasing frustration of the main character, as well as choreography, aesthetic, camera framing and a crowd of characters to create repetition.

The subject chosen for the short is one with a wide appeal (wanting to rebel against repetitive daily work and established routines), and it is presented with successfully crafted elements of humor and surprise. Its social commentary and cynical outlook provide food for thought that places it beyond the common comedy.

Interview – Daniel Martínez Lara on the making of Changes