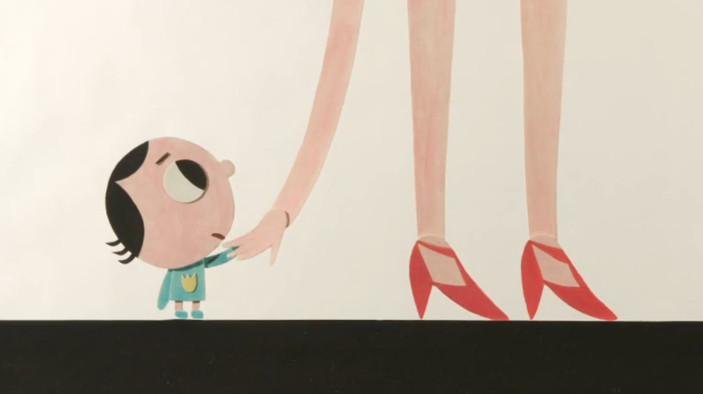 "A little girl in a world of high heels."

The Red Heels is a short film by Russian illustrator and animator Olesya Shchukina that deals with the experience of a child getting lost and finding her mother again. It was created during Olesya’s studies at French school La Poudrière using stop motion and cut-out animation techniques.

When I was around 4-5 years old I grabbed the hand of a man I didn’t know thinking it was my dad (…) when I looked up I realised it was a totally unknown man with a beard.

The film features one main character, a number of supporting characters, an emphasis on offscreen space and is narrated from the point of view of a child.

Staged in an urban location with a stylized minimalist aesthetic,the short makes special use of colors and shapes to help identify characters. The child’s conflict is augmented through the use of offscreen space as well as through other external elements that actively prevent the little girl from finding her mother (these could be categorized as a conflict with the environment). Camera height is kept at ground level to tell the story from the POV of the child and to help build offscreen space.

Visual rhythm is handled through editing, motion within the frame and a few camera moves, complemented by music. Sound helps describe the locations as well as transmit the expressiveness of the main character.

What makes The Red Heels work so well? A feeling of authenticity that is transmitted throughout the short, a highly expressive main character, wonderful animation and aesthetic work, great creativity, playfulness, economical storytelling and a subject that will appeal to a wide audience.

Director Olesya Shchukina kindly shared with us some insights on the making of The Red Heels:

Some stories behind the film:

1. The Red Heels was my student film at La Poudrière. The theme was given by the school. The brief was to make a one minute film on the theme of “Child’s point of view”. I decided to play it literally and to show how the world looks like from the point of view of someone who’s small. I had two memories from my own childhood that I used:
Once when I was around 4-5 years old I grabbed the hand of a man I didn’t know thinking it was my dad. I didn’t look up first and from the bottom it seemed to be my dad but when I looked up I realised it was a totally unknown man with a beard. My dad stayed just 5 meters away, so I quickly ran to him.
Every summer I spent at my grandmother. She was a retired teacher and school principal in a small town in Ukraine. It means that a lot of people in the town knew her. Former colleagues, students, their parents. Every day we went to the market to buy some fruits and vegetables. The market was just 10 minutes walk from home but it always took us at least 30 minutes because every time my grandmother bumped into someone she knew and had a conversation with them. It was super boring to stay next to her and to wait till the conversation is over.

2. The very first design of the girl was very different. I was pretty proud of it and used it in the animatic, too. I decided to show the animatic to Konstantin Bronzit and ask him what he thought about it. Bronzit was my main teacher back in St Petersburg, so I trusted his opinion a lot (and I still do). I sent him the animatic and his first reaction was that the design of the main character was super unattractive and ugly. He called her something like a face with a mop instead of the hair. He said it was important for the spectator to like the girl from the very first sight and not to be confused by the design. I got his point. After that I drew around at least one hundred of different girls. I think I spent at least a week drawing them. It brought me to the final design we see in the film. (some pictures are here: Behance.net)

3. In the last scene of the film the cat licks its pow. And it’s not a tongue but a little leg of the girl that I coloured differently. I actually made a tongue specially for this scene but when I started to animate it, I realised that it looked wrong.
Before the production started, I made some very short tests just to see that the puppets worked well. When I tested the cat puppet, I tried to animate how the cat licked its pow. And at the test animation I did use a girl’s leg just because I didn’t have anything else. So when I animated the final scene, I remembered my test and just quickly coloured one of the legs. It worked perfectly and no one ever noticed it.